This story was written by Jane Warren Waller in 1977. It is the true story of her childhood. She was born on 4 Dec 1924 so this story would have taken place starting in 1928. She was the youngest of three siblings – Nancy and Joe were older than her.

All good Nanna stories begin, as will this one:

Once upon a time – many years ago – there as a little girl called Pol Shane. That was not her real name. When she was three years old she decided she wanted to be called Polly, as that was the name of her favorite person – Aunt Polly, a black nurse, who took care of her much of the time.

One morning at breakfast she announced to an amused family, “My name Pol Shane.” They smiled at the smallest of the family group, but paid little attention and continued to call her Jane. She persisted through the next days and weeks. Each time she was called Jane, she would lisp, “I not Shane! I, Pol Shane!” This speech became more and more insistent and at times the little girl would stamp her small foot to stress her determination. With an appeasing grin, one by one the badgered family did call her Pol Shane, thinking that so small a child would soon forget the idea of changing her name and all would be back to normal. This did not happen. All of her girlhood she was called – not Polly Jane – but Pol Shane, as she had first lisped the name as a three-year-old.

Pol Shane was born on her father’s Middle Tennessee farm, three miles from the small town of Fayetteville. She was not born in a hospital, as most babies are now. She was born at home in the old ornate brass bed of her parents. It was the first Thursday of December in the year 1924 – early in the morning. Her sister, Nancy, had caught the school bus to attend her first grade class. Her brother, Joe, was almost four years old, so he was too young for school. He was sent on an errand to Aunt Nan’s house and away from the big happenings at his own home.

Later in the day when he returned and stood by the bed, peering into the swathe of blanket that held the tiny baby, “Sure could have used a brother better,” he said.

To be Joe’s real boy brother was the one goal of Pol Shane’s childhood. No childhood story of Pol Shane could ever be told without some mention of this constant companion, her brother, Joe.

Some people “name drop”, but Pol Shane would “Joe Quote.”

“Joe says you hold a mouth harp this way.”
“Why?”
“Joe says if you hold it this way, you won’t cut your tongue on the tines.”
“Joe says that a piece of cane makes the very best whistle there is.”

If Joe said it, Pol Shane was sure it was true and wise.

He taught her many things – much that his mother would rather she not have learned. For example: He taught her to dip snuff. In those days many of the older farm women would put powdered tobacco in their lower lip and enjoy the flavor of tobacco, as they went about their chores. As strongly as Pol’s mother thought it was a loathsome habit, “Down right filthy!” said her mother, Joe and Pol Shane felt that snuff dipping must be the most admirable trait of all mankind.

Just one try with the real tocabbo snuff convinced the young ones, that the path to admiration could not lead that way. After spitting and sputtering the last of the horrible taste of the real snuff from their mouths, they figured a way to enjoy the enviable style of dipping without the taste.

“Good! Good! Ya got a good bulge. Now pack it down with your tongue,” advised Joe.

“Wall wye,” sputtered Pol, only now realizing it took a real talent to dip snuff and talk at the same time.

Joe broke a twig from a tree and chewed a soft brush on the end of it. This would serve as a dip stick for the snuff. He dipped the stick into the snuff can, the soft moist brush bringing out a large glob of snuff, as he filled his lip. A large bulging lower lip was a sure sign of a true snuff dipper. The trickle of black snuff from the corner of the mouth was another sure sign.

“Hey, look at me!” called Joe, as he spat a stream of juice across the dusty road and it swished through the weeds along the far side with only the last misty droplets falling in the dust to make a dark lacy pattern on the road.

“Hey, look at me!” yelled Pol Shane, but her snuff had not risen in a full glorious arch across the road. Her snuff had dribbled miserably down the front of her white dress.

“She’ll git you, Joe. You’re older,” she paused, “and you oughta know better,” she continued in perfect mimicry of their mother.

“To wash that dumb dress. Why ya wear a dumb dress anyway? Can’t see dirt nor nothing on overhauls. Dresses are plain dumb.”

Tears stung behind Pol’s eyes. How could she be a real boy brother if she had to wear a dress? Her dream was to wear overalls like Joe’s.

In those days modern mothers instructed their daughters, “Little ladies do not wear pants!” Pol and Joe had a very modern mother.

She walked several steps behind Joe, dragging her bare feet thought the tall weeds, as they made their way thorugh the pasture to the creek. Her mind was so heavy with the dress problem, that she stepped right in the middle of a prickly pear. Joe was more disgruntled than ever with his playmate, as he pulled the tiny stickers from her wriggling, wounded foot.

Joe’s ill humor never lasted longer than the shadow of a bird flying overhead, so it was a happy voice that called, “Come on, Pol. Let’s lick salt.”

As much as Pol Shane wanted to be a boy, her stomach was strictly feminine, and she had no desire to lick a foot square block of salt, that cows and horses had made wavy grooves in with their rough tongues. But her determination to please Joe was stronger. She could have pretended to lick the salt, but she somehow felt anyone worthy of Joe’s admiration would have to do the real thing – horse slobbers and all – so she put her tongue lightly – every so lightly – to the block.

They continued to the creek, where Joe did a passable job of washing the front of her dress. He told her to run around in the sunshine to make it dry faster. She twirled and whirled with so much joy of life, that she fell on the ground, mixing new dirt with old stain.

When they arrived at the house their mother made only the usual daily comment, “How can a little girl get so dirty in one afternoon.”

All was well! Pol sighed with relief, thinking, “Boy! Ole Joe can do jist bout anything.” 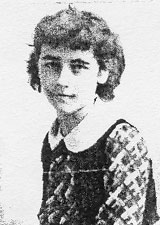